demand, the cellular energy balance is disrupted, which can ultimately lead to cell death, organ failure, and mortality. Therefore, matching oxygen supply to oxygen demand is critical to tolerating hypoxia. One means via which organisms can achieve this balance is through changes in ventilation. Increasing ventilation, either by breathing more frequently and/or more deeply, can increase the delivery of oxygen to tissues.

When most vertebrates are exposed to acute hypoxia, their immediate compensatory response is to breath more (i.e. to hyperventilate). With prolonged hypoxia, additional compensatory changes occur in the ventilatory reflex circuit that further increase hyperventilation. Such hypoxia-mediated changes in breathing are termed the hypoxic ventilatory response (HVR) and ventilatory responses to hypoxia vary widely depending on the pattern and length of hypoxic exposure. The HVR is the result of a complicated web of molecular interactions that underlie plasticity in the respiratory control reflex circuits of the central nervous system and ultimately control the physiology of breathing in hypoxia.

Differences in these molecular pathways may impact the ability of organisms to tolerate acute or prolonged hypoxia and thus partly underlie variability in the degree of hypoxia-tolerance apparent in divergent organisms. Thus, understanding the molecular and neural control of ventilation in hypoxia has important implications for basic physiology and is emerging as a central component of several clinical fields related to hypoxia (e.g. stroke, chronic cardiac and pulmonary disorders). 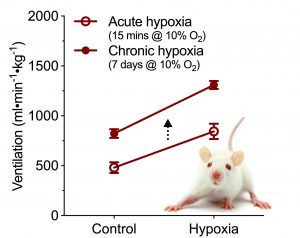 This is a typical HVR of a mammal (in this case of a rat). Note how ventilation increases by ~ 50% when a rat is breathing acute hypoxia (10% oxygen, open circles). Following one week of chronic exposure to hypoxia, rats exhibit an increase in the gain of their HVR such that breathing remains increased even when in normoxia (control, dark circles), and the magnitude the acute HVR is increased. This HVR to acute and chronic hypoxic exposure is representative of most vertebrates. 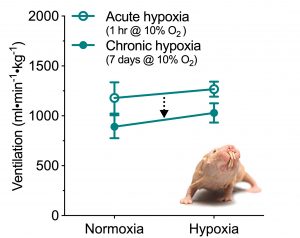 Conversely, this is the HVR of a naked mole-rat. Note how ventilation does not change significantly when a naked mole-rat is breathing acute hypoxia (10% oxygen, open circles). Following one week of chronic exposure to hypoxia, naked mole-rats exhibit an decrease in the gain of their HVR such that breathing is decreased overall. Naked mole-rats likely live in an intermittently hypoxic environment, with relatively severe hypoxia in crowded nest chambers. This minimal degree of breathing plasticity under various hypoxic challenges suggests that this physiological adaptations may be severely blunted due to life in intermittent hypoxia. We are currently exploring the molecular mechanisms and changes in synaptic plasticity that underlie the unique HVR of naked mole-rats.

Currently, we are working to describe ventilatory responses to acute and chronic hypoxia in awake, freely behaving naked mole-rats using plethysmography and respirometry. In combination with pharmacological approaches, we are beginning to tease out the underlying molecular mechanisms in the central nervous system that mediate the unique HVR of naked mole-rats, and to contrast these mechanisms to what is already known regarding the molecular control of the “normal” HVR in hypoxia-intolerant species and other hypoxia-tolerant species.